The Sunday Business Post | A positive year for vendors and landlords…

This year has been eventful globally but, despite a sluggish start, the Irish political and economic landscape has steadied and improved. The underlying and dominant feature of the residential market this year has been the much documented low stock of housing available that has continued to affect buyers and sellers. Both were strongly affected also by the Central Bank’s 2015 regulations on residential lending; we welcome the recent relaxation of these rules which we are hopeful will motivate increased supply on the market.

Through it all though our own and our clients’ experience has been positive. In accordance with the general trend, our first quarter (Q1) transactions highlighted strong price increases. The average price per square meter increased by 7% on the fourth quarter of 2015 and by a massive 16% on the first quarter of last year; the actual average price per square metre that we achieved during Q1 was €5,381. We sold a Victorian red-brick in Ranelagh for €1,350,000; having taken it off the market and advised our client to add parking, the three-bed townhouse was sold later at €100,000 above asking. We continued to observe strong demand and prices in the second quarter (Q2); prices per square metre in Dublin 2 increased 6% from an average of €6,133 in Q1 to €6,488 in Q2. We sold a two-bed apartment in The Waterfront complex in Grand Canal Dock at €625,000; at €25,000 above asking, this was the top price per square metre that we observed in Dublin 2 – €7,576.

While Daft.ie reported that half of all properties were sold within two months during the third quarter (Q3), we observed the average time on the market drop to an average of seven weeks throughout Dublin and to six weeks in Dublin 2 (this has fallen to four weeks in the fourth quarter (Q4)). A remarkable result achieved was €535,000 for a penthouse in the older (built in 1996) Harcourt Green complex on Charlemont Street. At €85,000 above asking (€5,944 per square metre), it was agreed within two and a half weeks of launch. In Q3 we also brought the penthouses in Spencer Dock in the IFSC to the market; interest in the four three and four-bed duplex penthouses, priced from €900,000 to €1.45 million, was huge and the sales were agreed promptly at the asking price or above.

Tenants are staying longer and renewing tenancies and, as the year progressed, we dealt with an increasing number of investors attracted by strong yields and capital appreciation. Investors have dominated Dublin 1 and 2 and Docklands where over 80% of the buyers with whom we dealt were investors, and where we observed that more than 75% were cash buyers. Rents agreed by this firm have increased overall by between eight and ten per cent between Q1 and Q4. Average rents agreed so far in Q4 are €1,783, €2,296 and €3,075 in the one, two and three-bed categories; we have rented a two-bed penthouse at Clarion Quay in the IFSC for €4,250. 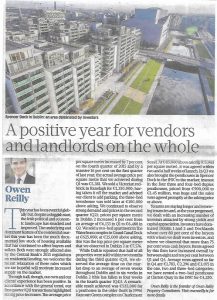