The Irish Times l Big little home in the city for €525,000, by Alanna Gallagher

East Wall’s gentrification continues. The soon-to-happen move by tech giant Facebook, from south of the river in established and international-in-feel Hanover Quay north to East Wall, a proper Dublin community with a personality riveted together by its hardworking docker heritage.

If you’re sceptical about its credentials and the rise and fall of tech firms, then perhaps the arrival of supermarket groups Lidl and Aldi to the area might open your eyes to its amenities – established schools, churches, corner shops, doctors and a post office, all on your doorstep – and its proximity to the city centre is probably its greatest appeal.

Property prices are rising rapidly but none have quite scaled the heights of 107 Church Road. This property sold for €135,500 in June 2015.

The house needed complete modernisation and it was Adrian Richards of Claremont Construction who extended it by adding a two-storey extension, making it about a third bigger. He says he’s spent €200,000 on the refurbishment. It now measures 192sq m/2,066sq ft and is back on the market, asking €525,000.

Richards has 25 years’ experience in flipping houses. His most recent project in East Wall was 23 Hawthorne Terrace, playwright Seán O’Casey’s former home. It was purchased in November 2013 for €115,250 and a year later was back on the market through agents DNG asking €375,000. Six months later, in May 2015, it was registered as sold for €350,000, according to the Property Price Register.

In December 2014, the house next door has been registered as being sold as two transactions, 106a Church Road and 106b Church Road, each selling for €119,079, according to the Property Price Register.

Agent Owen Reilly, who is selling the property, is at pains to point out that despite the almost quadrupling in price, the house represents good value for money, because when you break it down it works out at a cost of €254 per square foot. However, the website Onlinetradesmen.ie lists the 2016 cost of renovation as being €1,020 per square metre, or about €110 per square foot, which is significantly less.

Designed by Richards, who used the services of an architect to get planning, the house has been really well laid out. It features a formal sitting room to the front, a bright westerly room with a large window and an open hearth.

To the rear of the ground floor is a large open-plan kitchen, dining/living room, which has an internal courtyard to bring light into the middle of the building.

Richards installed a handleless kitchen from Ikea and wood worktops from Abbey Woods in Baldoyle. Floor-to-ceiling sliding glass doors open out to the east-facing back garden, which has a patio, with the rest laid out in lawn.

Upstairs there are two generous double bedrooms. The master is to the rear and has a shower en suite bathroom. Both need built-in-wardrobes.

To the front is a third room lit by roof lights, but because it is just one inch shy of the ceiling height required by building regulations to call it a bedroom, it isn’t listed as a bedroom. Nonetheless it will be a very valuable asset to the house, offering another room for a tenant to enjoy should the buyer wish to avail of the tax-free room-to-rent scheme to help with the mortgage. It would also make a gorgeous nursery, home office or music room.

The contemporary fit-out house is smart. While he’s thought of many extras, including a downstairs wc, some of the finishes are on the cheap side – the flooring, for instance, is a laminate, when a solid or reclaimed wood would feel more authentic – but these are minor gripes in what is essentially a whole lot of house. 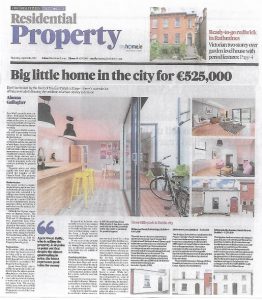