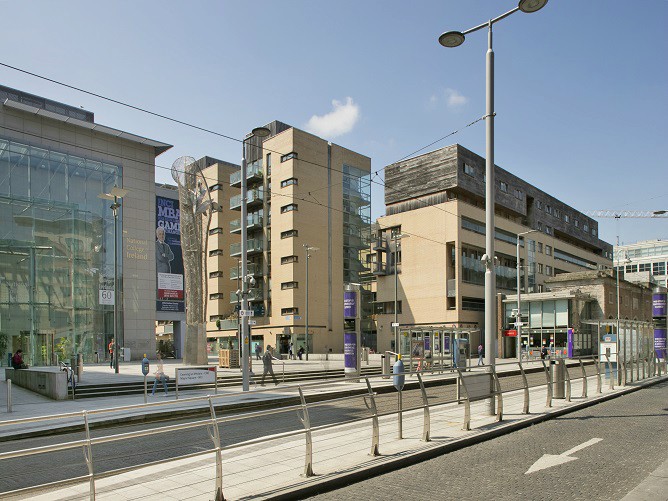 BLOG Spencer Dock – apartments to stand the test of time

The reclamation of Spencer Dock in Dublin’s North Docklands has been lauded as the most ambitious urban re-generation project ever undertaken in Ireland. To the east of the International Financial Services Centre (IFSC), the 50-acre brownfield site is home today to Price Waterhouse Coopers (PWC), the Kevin Roche designed National Convention Centre and the waterfront Spencer Dock apartment complex – where the penthouse apartments are now on the market for the first time. We have been selling and renting apartments in Spencer Dock since 2008 and, notwithstanding the controversy that surrounded its development, the complex is of great interest; it has contributed significantly to Dublin’s residential stock and it is standing the test of time for all the right reasons. (It has been reported that One Spencer Dock, which houses PWC, recently sold for €240 million.)

A joint initiative of CIE, Harry Crosbie and Treasury Holdings, the Spencer Dock apartment complex was completed in 2008. The developers’ ambitious goal was to create one of Dublin’s most sought-after addresses and, undoubtedly, the location has lived up to their ambition… It is a five minute walk one way to the IFSC and five the other way to the Three Arena; it is served by the Docklands railway station to the north and by its own private Luas stop. The public realm has evolved with the creation of open green spaces and the campshires on North Wall Quay are a heavily-frequented leisure trail.

Luxury homes for a quiet life in the city centre

Comprising some 600 apartments, no expense was spared in the creation of a luxury residential environment that was advertised in superlatives. Designed by Scott Tallon Walker and built by SISK, the apartment buildings are set around courtyards that feature cascading waterfalls, rolling hills, trees and even a river. To the right of the entrance on the east side is the residents’ concierge’s office that is open daily from 7am to 10pm. A beautifully-planted, lush central walkway opens on the west side to overlook the eponymous restored Spencer Dock/Royal Canal. The high quality natural stone and materials used will endure and have enduring appeal; high specification kitchens and bathrooms were provided as standard; ceiling heights are higher than normal and full-length windows flood rooms with natural light. All occupants enjoy a pleasing aspect and, from the upper levels, views across the city as far as Howth and Dun Laoghaire.

Dublin’s Docklands represents the most valuable residential real-estate in Dublin’s city centre and a particularly strong market has developed for Spencer Dock. We have seen square meter prices increase from an average of €2,936 in 2010 to €4,479 last year with consistent demand from both owner-occupiers and investors. (The highest North Docks price per square meter last year was €5,533 for a two-bed apartment at Longford House in Spencer Dock.) We rented one-bed apartments for €1,300 last year while the average rent in Spencer Dock for a two-bed was €1,760; testifying to the increasingly cosmopolitan Docklands community, we dealt with tenants from every continent. For owner-occupiers and rental tenants alike, all residents enjoy thoughtfully-designed homes that are well-maintained and well-managed – just what the market wants.