The launch of 59 Forbes Quay – a two-bedroom penthouse in the Dublin Docklands – this week is well timed. One of the major selling points of the penthouse are the two rooftop terraces, which combined stretch to 200sq m (2,152sq ft). Not only are the scale and views from the terraces spectacular, the launch coincides with a feature film, which premieres next week, about the life of Mary Reynolds, who designed the rooftop gardens.

Dare to be wild tells her story from rank outsider to winner of a gold medal at the Chelsea Flower Show. Her class included Prince Charles, who wandered into her garden at one stage thinking it was his own entry, until he was quietly ushered out by royal aides.

“Creating a natural living space in an urban environment is a challenge that quadruples when dealing with a rooftop garden – but we managed to create a simple space which surrounds you with the energy of nature,” says Reynolds of the penthouse garden.

The terraces, filled with raised beds housing wildflowers, silver birch, olive trees and bamboo, are accessed through patio doors from every room, allowing the apartment to open up from 140sq m (1,507sq ft) to a 340sq m (3,660sq ft) on dry days.

Reynolds, who has designed for the Royal Botanic Gardens, Kew, may describe the planting as simple, but the attention to detail is anything but.

The entire garden is watered by a hidden irrigation system and all the raised oak planters have had the sharp edges softened: “It took a guy a whole month to sand all the edges, and all the garden really needs is a bit of love every now and then,” says the current owner, who is moving to a period house nearby.

The apartment originally had three bedrooms, but the owners, in conjunction with interior designer Aurora Aleson, decided to convert the third bedroom into a swish dressingroom for the master suite.

Other details such as wiring for Bang and Olufsen surround sound and raising the ceiling height over the dining space to house a huge pendant light, reflect the thought that went into the decor. Flooring is a mixture of quarter-sawn white lacquered oak and polished Kilkenny limestone, echoing the monochrome kitchen – which has a mixture of black Silestone and white Corian countertops, with Miele appliances.

Views take in the Dublin skyline, River Liffey and canal basin all the way to the Dublin mountains.

It is the 200sq m of terraces designed by Mary Reynolds that make 59 Forbes Quay unique. The penthouse is on the market through Owen Reilly with an asking price of € 1.4 million.

It’s hard to fathom that this hipster location, where rooftop apartments are selling for more than 11 million, was a cholera-ridden slum in the late 19th century. There are about 2,400 apartments in the Docklands area. Estate agent Owen Reilly estimates there are about 25 penthouses.

The market for penthouses is high but they are as rare as hens’ teeth, and currently there are only two listed on the market: 59 Forbes Quay and 26 Gallery Quay, on the market through Knight Frank asking €695,000. Rents for spacious penthouses fall between €4,000 and €5,000 per month. Cranes have returned to the skyline, with developers more confident now the market in the Docklands has recovered by 35 per cent.

Capital Dock Developed by Kennedy Wilson, this lies on the corner site of the River Liffey and River Dodder, and will be one of Dublin’s biggest build-to-let developments. Kennedy Wilson, which will manage the entire residential offering, has announced that office tenants will get priority access to the residential units. The development will add 190 apartments to the area by 2018.

Spencer Dock Set behind the Convention Centre, these units designed by Scott Tallon Walker range from 127sq m (1,367sq ft) to 362sq m (3,896sq ft) . Four penthouses ranging from €900,000 to €1.45 million are now listed as sale agreed – three of these have private rooftop swimming pools. Spencer Dock was listed as the most expensive area to rent in Dublin according to a price survey last year. Further units will be available soon.

Boland’s Quay This iconic site will provide 41 apartments designed by BKD Architects and will see an eclectic mix of refurbished industrial heritage buildings (the old mill buildings) and contemporary units overlooking the waterfront.

Hanover Quay Construction has begun on The Reflector, which is being developed by Michael Cotter’s Park Development, and will offer 40 apartments, three of which will be penthouses, by 2018.

Despite the number of cranes on the skyline, high development costs of apartments means the majority of construction currently in the Dublin Docklands is in the commercial sector.  There is a noticeable increase in the size of penthouses, an indication perhaps that developers are confident the high prices being achieved will continue. 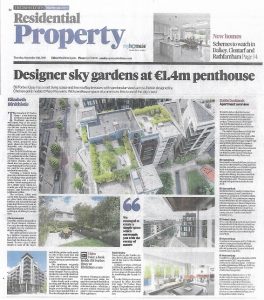