Docking and set to take off, by Eithne Dunne

Less than two kilometres from Dublin’s city centre, in the heart of the tech hub, water lovers can catch the surf, do a backside spin on a wakeboard or take part in a stand-up paddling yoga class.

On a sunny day in September, the Grand Canal Dock is alive with people making the best of the Dublin bikes rental scheme, dining al fresco or enjoying the sports on offer from local company Surfdock. During the week, people in suits emerge from the surrounding office blocks at lunchtime to enjoy Grand Canal Square. The place buzzes.

Few parts of the capital has changed as much as Grand Canal Dock in the past decade. Earmarked for regeneration since 2000, and since assigned strategic development zone status, the former industrial area has morphed into an urban centre brimming with young workers from home and abroad.

Auctioneer Owen Reilly has lived on Hanover Quay since 2006, and opened his office nearby in 2008. “I was familiar with some rejuvenation projects overseas, such as Canary Wharf, from my college days, so I saw the potential here,” he says. 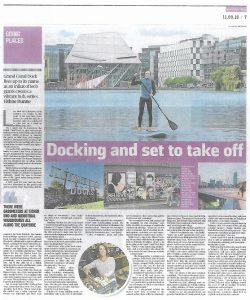