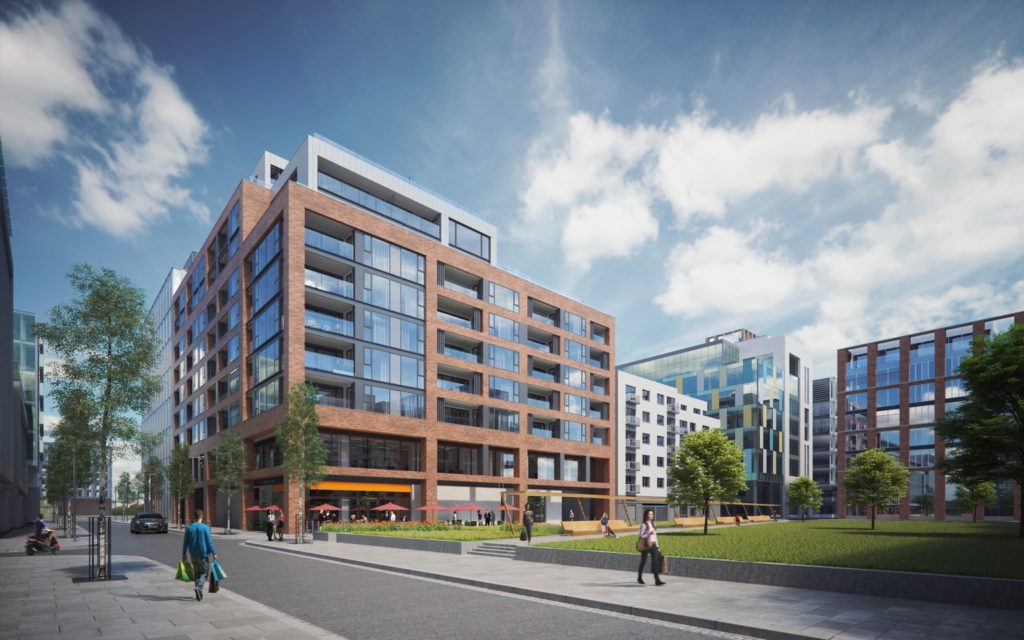 Dublin docklands apartment block on the market for €52.5m | Blog

This prime private rented sector (PRS) opportunity, situated the heart of the Grand Canal Dock, comprises a premium residential development of 72 units, forming part of the wider TIO office scheme at 76 Sir John Rogerson’s Quay –  currently being constructed by Bennett Construction. The Joint Selling agents are guiding €52.5m for The Benson Building, which is due for completion in Q1 2020. The current estimated rental value (ERV) is approx. €2.9m per annum.

Overlooking the planned Benson Street Park, the 11-storey over basement building will offer 72 premium residential until finished to exacting standards, 2 ground floor commercial retail units, a private residents’ recreation room suitable for use as a gym or recreational space, a concierge foyer and secure underground parking for 72 cars.

At the end of Q1 2018, purpose-built office accommodation in the South Docklands stood at 243,737 square metres – accommodating approximately 20,000 employees. Despite this, there are just 2,500 units of existing residential accommodation.

Moreover, while the pipeline of net new office development in the area has the potential to accommodate over 11,000 additional office-based workers, just 665 new residential units, including The Benson Building, are currently in the pre-planning, planning or construction phase.

Upon completion, The Benson Building will account for approximately 11% of new residential supply in Dublin’s South Docklands.

According to Fergus O’Farrell, Investments Director at Savills Ireland, The Benson Building presents a rare opportunity to acquire one of only a few PRS schemes in the Dublin docklands.

According to Owen Reilly, the imbalance between residential units and office space, in a neighbourhood where multi-national employers are constantly expanding and hiring young professional tenant, frequently from abroad, creates a compelling case for strong rental demand into the future. Grand Canal Dock is now firmly established as Dublin’s central business district and is the capital’s strongest rental market.

The Docklands experienced strong annual rental growth of 10.8% in 2017. Rents in the area continue to increase, with growth averaging approximately 5% over the first six months of 2018, and renewal rates are running at 85%. Cumulatively, this represents stronger average rental growth than that of the Dublin market as a whole and demonstrates the demand for private rented accommodation in this neighbourhood.

Dublin’s South Docklands has undergone substantial redevelopment and is now one of the most appealing urban quarters within the city, comprising modern offices, theatres, hotels and high quality residential apartments and a host of retail, bar and restaurant offerings.

The area has also become a nexus of Dublin’s burgeoning business communities and is the choice for global tech giants such as Google, Facebook and LinkedIn, in addition to the majority of the city’s leading law firms.

The development is located within walking distance to Merrion Square and Government buildings, while other significant landmarks within reach include the Dublin Convention Centre, The 3 Arena and the Aviva Stadium. The main shopping area of Grafton Street and College Green, the location of the prestigious Trinity College, are a fifteen-minute walk away.