All of the city’s spectacular views from 12 floors up, writes Mark Keenan

To understand just how much you can see on a clear sunny day from the higher reaches of Dublin’s tallest residential building, we’ve compiled a range of photos taken both inside and outside apartment 74 — which shares the 12th floor of the Millennium Tower at Charlotte Quay, Dublin 4.

The apartment, which has just come on the market this weekend with a price of €895,000 attached, is one of the few in Dublin which is ‘triple aspect’ — that is, with views from three of its four sides. No. 74 has floor-to-ceiling windows right across its main living areas as well as its two bedrooms, and it comes with one large outdoor ‘sky terrace’ as well as a smaller outdoor space from which you see a three-quarter vista of the capital and its surrounds.

From the master bedroom, lying on your bed and facing out to the city you can see, to your right in the distance, the stylish black Monte Vetro — the tallest building in Dublin, the European Headquarters of Google and the mainstay of the Silicon Docks. Closer to your apartment on the left is the historic Boland’s Mill, which saw action in 1916 as the headquarters of the 3rd Volunteers under Éamon De Valera, who famously engaged the British forces successfully from here at Mount Street Bridge. The mill is currently being transformed by a mixed €150m redevelopment project which will see apartments and office spaces. To the right is the super-skinny Alto Vetro by Shay Cleary, the second-highest residential building in Dublin — with 16 floors compared with 17 in the Millennium Tower. In the centre of this bedroom view is the Inner Canal Basin, home to a community of houseboat and barge enthusiasts. Out in the water is the HQ of Waterways Ireland, known locally as The Box in the Docks and to the forefront is the area’s moveable  bridge.

From the terrace looking to the south you can see Dublin Bay and the Irish Sea. There’s the twin fingers of Dún Laoghaire’s piers and that harbour’s busy and colourful flotilla of sailboat traffic. The view shows the spires of the old Mariners’ Church and St Michael’s Church of Dún Laoghaire.

Turning to the right, you’ll see the twin peaks of Killiney Hill and Dalkey Hill, the former topped by its famous obelisk and the latter by its miniature castle.

From the living room corner and the main terrace, you can see the  Aviva Stadium — the temple of Irish soccer and rugby — designed with its famous ‘slipped lip’ glazed form by Scott Tallon Walker Architects, which lights up at night and houses 52,000 for Ireland’s most anticipated events and concerts. In a famous Carlsberg ad, the best apartment in the world had balcony views of it. A decent telescope might help follow the fray from here. Nearer is the former Victorian gas holder, now a landmark residential building designed by architects  O’Mahony Pike, who also designed the Millennium Tower.

By far the most exciting water view at night in Dublin is from the corner side of the apartment in a corner building in the Basin. The scene right below has become the contemporary postcard shot for a modern Dublin with the cubist chequerboard face of the Marker Hotel by Manuel Aires Mateus, the sloped, glazed projector of Daniel Libeskind’s landmark Bord Gáis Energy Theatre. To set it all off is Martha Schwartz’s street-art installation in a display of red-angled light sticks, which give the place a distinctive glow at night, and across the river lies the tilted barrel of the Convention Centre by Kevin Roche. The views from number 74, a two-bedroom open-plan apartment of 1,195 sq ft are open to the public tomorrow as part of a special Docklands open day. 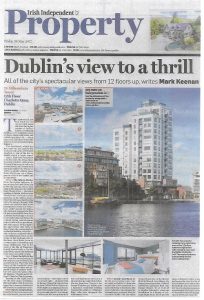