In the heart of the city, by Katy McGuinness

‘There’s a definite sense of re-urbanisation in the air,” says agent Owen Reilly, as he gives me the tour of 11 Albert Place, a smart Victorian townhouse tucked away at the end of a quiet cul-de-sac off Grand Canal Street Lower in Dublin 2.

Well, he would say that, wouldn’t he? But it makes sense, this gravitation back towards the city centre. In just about every other city in the world, residents are happy to pay a premium for living close to where the action is. But in Dublin it has tended to be houses in the genteel suburbs that command the highest prices, confirmation perhaps that we Irish are wedded to our gardens and our driveways, and won’t give them up without a fight?

But as the population of the capital becomes ever more diverse in terms of nationality and culture, there are indications that the old order is shifting, and that the idea of living within walking distance of work and the shops and restaurants of the Grafton Street area is coming back into favour.

Of course, most of the residential accommodation in the city centre is in apartments, with fewer options for those looking for a family home with its own front door and a bit of outside space. Which makes 11 Albert Place an interesting prospect for a family with an appetite for embracing city centre living.

The current owners bought the property 12 years ago. Since then they have upgraded the house by re-roofing, re-wiring and re-plumbing, and carrying out a top to toe refurbishment that has included installing new bathrooms and American oak floors. They have insulated the property and restored the original sash windows where possible. They are, says Reilly, only leaving because life with three children in the 1,475 sq ft (137 sq m) house has become a bit of a squeeze; when they arrived back in 2004, they had only one child.

They leave behind a townhouse that is elegantly decorated, and presented in a way that combines the best of period features with contemporary comfort.

Size-wise, it suits a couple, a small family, or downsizers keen to make the most of an empty nest and embrace the cultural life of the city. And for anyone working in the docklands, the location is also bang on. The new Twitter headquarters at Cumberland House off Fenian Street is a couple of hundred metres away, and the Collison brothers’ Stripe is in the One building that’s visible from the front door of No 11. Google and Facebook are just two of the other companies with large office populations in the area, not to mention the law firms, banks and other corporates headquartered close by. Trinity College is also a short walk away.

The house is positioned at the west end corner of the cul-de-sac, and parking is on-street. Residents’ permits are available at a cost of €50 per year.

At entrance level, there is a front to back double reception room – it would originally have been two separate rooms – with two working fireplaces with cast iron canopies. There is a compact guest lavatory off the hall, and the kitchen to the rear has units painted in a fashionable pale grey. There are integrated appliances – a Miele dishwasher, and Siemens oven and hob – as well as an attractive AGA range for cosiness. A Zanussi washer and dryer is cleverly tucked away in a cupboard. Double doors lead out from the kitchen to the small back garden, which has a paved area and a super low-maintenance lawn of artificial grass – no mower required. The garden also has a couple of handy storage sheds.

Upstairs there are three double bedrooms, the master with an en suite toilet and shower cubicle. The family bathroom has a free-standing roll-top bath and a separate shower. Two of the bedrooms have fitted wardrobes and there is a spacious storage closet adjacent to the third.

Directly opposite the end of Albert Place East is 3FE, considered by many to serve the best coffee in the city, and a daytime hub for tech and start-up types. The Chop House, Old Spot and Juniors are all handy local restaurants.

Close by too is Osteria Lucio, Ross Lewis’ Italian restaurant, which has a wood-fired oven and makes excellent pizza, and the just-about-to-open Charlotte Quay, the latest venture from the team behind Coppinger Row, is located in the premises formerly occupied during the boom by Ocean, and latterly by Mourne Seafood.

Nearby is Grand Canal Dock home – the definitive nocturnal postcard shot of modern Dublin – and home to the Bord Gais Theatre and a plethora of bars and restaurants. 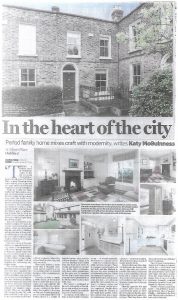