Living the high life in the docklands, by Mark Keenan

The two-bedroom apartment has elevated views directly overlooking a sweep of the River Liffey from its location on the waterfront and these stretch for miles to the Dublin Mountains beyond.

Only in the docklands, where accommodation can stretch to 16 floors above the street, are proper high rise views like these available in Dublin.

A surprising number of families live in these high dockland homes and this particular apartment has been home to a young couple and their children for the past six years, during which time they upgraded the heating system and redecorated extensively.

Aside from some of the best views in Dublin, there are other reasons to stay put in this area.

The Luas connects here for rapid transport into the city centre. There’s the Odeon Cinema complex nearby for matinees in the evenings and at the weekends. There’s the Point Village Square for walking about and the Gibson Hotel for a Sunday meal, as well as the trendy eateries and bars contained within the IFSC itself.

The two-bedroom south-facing apartment is being offered at €350,000 which includes an underground parking space.

But it’s increasingly likely that the new owner of this apartment will be an investor, not only because rents are surging but also because of the plans for Point Village – one of the last big developments to be constructed for the North Quays. This site is currently earmarked for a large student village planned to accommodate almost 1,000.

Meantime, Nama has an interest in 75pc of the 22 hectares of land that can be developed in the Docklands SDZ area and is working at the moment with its debtors and receivers to get these sites moving with an eye on economically productive projects.

The fortunes of the Castleforbes Square apartments and the North Docklands in general have experienced a rollercoaster ride over the past five years.

These apartments were built by Liam Carroll, one of the biggest developers to go bust in the crash, and back when they were launched in 2005 it was pointed out that this was a “no frills” scheme. Early buyers were promised a chance to “get in early” to the North Docklands.

Unfortunately, any of those first buyers who acquired their apartments at the launch still haven’t recouped their capital value 11 years on. Despite the “no frills” tag in 2005, a one bedroom unit costed €290,000 and two-beds like this one started at €370,000 while a car parking space was a cool €30,000. Then the crash came and five years ago the two-beds had fallen as low as €140,000.

As it turned out, the buyers who moved in around 2011 and 2012 at the bottom of the market were the ones to garner all those big investment benefits. Since the then prices have more than doubled in the recovery, in part led by an influx of overseas tenants coming to work for the high-tech multinationals nearby and the banks and service companies at the IFSC. Back when Castleforbes was built, there was a question mark over the Docks, but today they have taken off as Dublin’s trendiest quarter.

The asking prices for the two-beds like this one are now approaching €20,000 shy of what they originally sold for. Interestingly, only six of the 300 apartments in the scheme have come up for sale in the last three years.

But even before the completion of the planned student village, this apartment is likely to rent for €1,900 per month in the current shortage, representing a fairly healthy yield to an investor owner of 6.5pc.

The Central Bank lending rules mean this unit is probably now out of reach for average owner occupiers on a mortgage.

The apartment at 471 Castleforbes Square offers 775 sq ft of accommodation, the equivalent of an average two-bed town house. The accommodation includes an open-plan living/dining room that opens to a south-facing balcony, two bedrooms and two bathrooms – main and a version which is ensuite to master bedroom. The BER is C1 and it has timber floorsrunning throughout along with a contemporary kitchen fitted with integrated appliances. 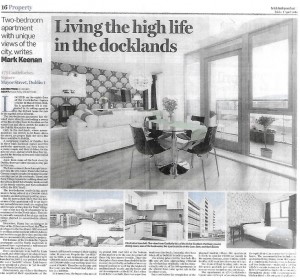