THE vendors of 11d Grosvenor Lane in Rathmines are Italian nationals who have recently returned home to Italy after a spell in Ireland. It’s easy to see why the smart architect-designed contemporary style mews property with huge windows has appealed to those who hail from a sunnier clime. They must have felt right at home in the bright, white interior, with its dramatic vaulted living area with a two-storey wall of glass overlooking the garden to the front — and stylistically, it has the look of a property that you’d expect to find in Milan rather than tucked away down a lane off Leinster Road. The house is located beside Grosvenor Square, home to the Kenilworth Bowling Club and Stratford Lawn Tennis Club — members can all be seen out in their whites on the summer evenings. 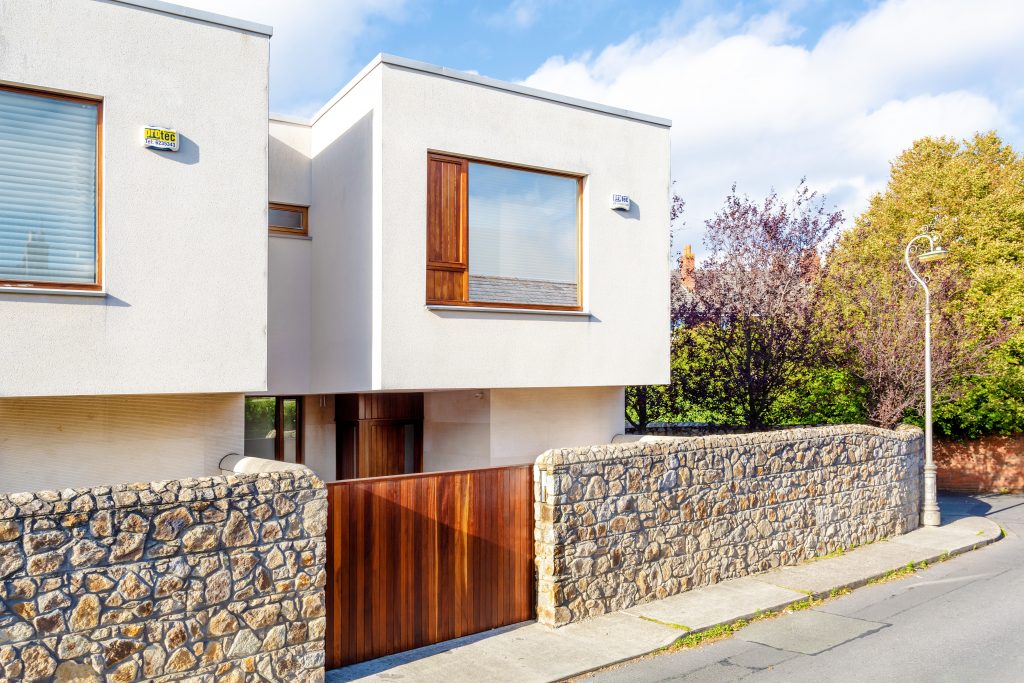 Designed by architects Horan Keoghan Ryan and constructed in 2009, the mews house sits behind a remote-controlled sliding gate and has off-street parking for one car. The developer was Derek Quinlan, one of the biggest movers and shakers in the property scene of the Celtic Tiger era. Quinlan was perhaps best known for his allegiance to the Barclay Brothers in their battles with another Irish property developer, Paddy McKillen, over the Maybourne Hotel Group — incorporating The Connaught, Claridge’s and The Berkeley in London — which made plenty of newspaper headlines a few years back. He put together a consortium that acquired the Savoy Hotel. When the Tiger collapsed, he headed to Switzerland. The two-bedroom property feels larger than its 915 sq ft, thanks to the 18-foot high ceiling height in the open plan living area, which is floored in walnut and kept toasty by underfloor heating. There’s a slick Siematic kitchen — also in white — fitted with Neff appliances including a washing machine, oven, fridge-freezer and dishwasher, and a large central island topped with solid wood that provides plenty of both work surface and storage. The kitchen/dining zone is floored in marble tiles and there’s a guest lavatory on the ground floor. From the kitchen, there’s a door to a patio area with rear pedestrian access to a narrow lane leading to Grosvenor Square. Upstairs, where another developer might have opted for three bedrooms, there are just two, each with its own ensuite shower room. Where the third bedroom might have been positioned is the void over the living area, which one can look down on to from a glasssided and marble-floored landing. Both bedrooms are doubles and have built-in wardrobes, and the bathrooms are smart and modern, with high quality fittings. The south-facing garden lies to the front of the property and there’s a patio area suitable for eating out of doors. Although there are a few trees, the garden would benefit from some considered planting and is small enough to be both attractive and lowmaintenance, but large enough not to feel mean.

The transformation of Rathmines from flatland to a desirable residential location within easy reach of the city centre is well underway. Some period houses that were once divided into a multitude of grim bedsits are being brought back into single-family occupancy, as the area becomes better appreciated. For families, there is a choice of schools, including St Louis’s and St Mary’s and sports clubs in the vicinity include Portobello GAA Club and Leinster Cricket Club. The Swan Leisure Centre has a swimming pool and gym facilities. The Swan Shopping Centre is a pleasure to use. As well as one of the new, made-over branches of Dunnes Stores, complete with James Whelan Butchers and a Sheridan’s cheese counter, there’s a branch of upmarket food store, Fallon & Byrne, handy for when one runs out of nduja and cavolo nero (sticking with the Italian theme) and it also holds a café that is a popular local meeting place, as well as a gelateria. And locals have no excuse when it comes to eating healthily thanks to The Hopsack, its shelves groaning with kefir and kombucha, and its own particularly addictive peanut butter. Other shops in the Swan Centre include boutiques Beautiful South and Bow & Pearl, and branches of Tiger and Dubray Books. As well as the multi-screen cinema in the Swan Centre, the Stella Cinema across the road offers a more luxurious movie-watching experience, complete with stuffed armchairs, footstools and cocktails. Eating options in Rathmines include the Stella Diner, and Joe Macken’s Hey Donna, serving an eclectic mix of Middle Eastern- and Ottolenghi influenced dishes that has been so successful that the restaurateur now plans to open a second branch in the city centre. Another new addition to the local food scene is Lil Portie, serving Jamaican food, which is open three nights a week in the 250 Squared coffee shop, beside the leisure centre. No 11d Grosvenor Lane is in turnkey condition, meaning that new owners need only unpack their boxes, nip down to the Swan Centre for some pasta and a few bottles of chianti, and start living a Dublin 6 version of the dolce vita.