When the duplex penthouse apartments at Clarion Quay in Dublin’s north docklands were launched off the plans in 2001, they had price tags of IR£400,000 (€507,900), and the scheme won an architectural award.

No 17, a three-bedroom duplex penthouse on the fifth and sixth floors, extends to 92 sq metres, with a 36 sq metre roof garden, and has a living room, dining area and galley style kitchen on the lower floor. Upstairs you’ll find three bedrooms, an en-suite and a bathroom.

They say: The new Central Bank of Ireland has added a focal point.

We say: There is an underground parking space. Back in the day you would have paid €30,000 for that. 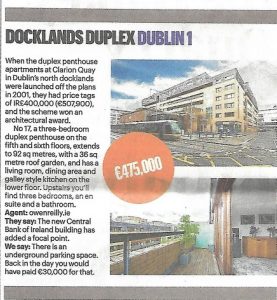