The story of the reinvention of the of 1,285-acre area of Dublin’s docklands has been well documented: since Google moved into Barrow Street in 2004, followed by a host of technology companies, and legal and financial companies, the downturn hit hard, but gradually the area rose from the ashes and it is now a vibrant, growing area of the city that is particularly attractive to a young working population.

Demand for residential property has risen as offices have grown and amenities have popped up. Docklands estate agent Owen Reilly recently released a report noting the strong asking prices and pent- up demand for property there.

In the last year the agency has achieved sale prices consistently 1.4 per cent above asking, and asking above average compared with other areas of the city. Owen Reilly, the agency’s director, believes this trend will continue.

“Already this year, prices have increased more strongly than I thought they would, and it’s performing more strongly than other parts of the city. I was predicting about 5 per cent growth this year in the docklands but I would suggest we’re nearly at that level already. What’s driving the price increases now is mostly the lack of stock. There’s very little for sale,” he says.

The docklands area has become more distinctly split into four neighbourhoods over the last number of years as it has developed, according to Reilly.

The reinvention began in the International Financial Services Centre (IFSC) area, which now has a mix of docks and warehouses interspersed with soaring bank buildings and Convention Centre Dublin.

“In the northern docklands you’d tend to meet a lot more first-time buyers, because prices are just that bit more affordable,” says Reilly.

The Spencer Dock apartments on the east side were completed in 2008. They’re luxury waterside apartments with 10-metre-high ceilings, underground parking and a dedicated Luas stop. On the market currently, 40 Hill of Down House, a fifth-floor, two-bedroom apartment extending to 92sq m, is priced at €470,000.

The Point Village area was opened up by the Luas extension down to the 3 Arena, but development there has lagged behind somewhat.

“Being honest, it’s dead at night, but the Gibson Hotel is doing well and there’s a raft of planning applications for that area. Paddy McKillen has bought a site there for a hotel, and he did a great job with the Dean, so that gives you an indication of the potential that area offers,” says Reilly.

Grand Canal Dock is quintessential docklands. Once a blackspot, today it is home to technology, law and media firms, the Bord Gáis Energy Theatre, and Dublin’s newest five star hotel, the Marker.

“In Grand Canal Dock you tend to be dealing with investors or people who have bought before and are buying trade-up homes,” says Reilly.

Amid an increasingly international community, the 17- storey Millennium Tower apartment building overlooks the dock. Currently on the market, for €550,000, is 47 Millennium Town – a two-bed, fifth- floor corner apartment of 70sq m with a spectacular view.

“There was a community there before all the development happened, and they are still there, but the arrival of Google and the like have really transformed that neighbourhood. It’s popular with staff who have been here five or six years now and want to settle down,” says Reilly.

The Gasworks development extends from Barrow Street to South Lotts Road, comprising quality apartments within leafy grounds. Currently on the market is 15 The Dickens, a bright, two-bed 73sq m apartment priced at €365,000. 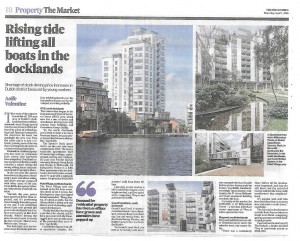