Among the many variables that affect the price of a house – location, orientation, off-street parking, access to transport – one of the key factors, as every estate agent will tell you, is décor. When Sarah Hughes and John Healy, vendors of 5 Grangefield in Ballinteer, first saw their house, it wore a pricetag of €20,000 less than a near identical house on the market nearby at the same time. Why?

Well, according to Sarah, it was down to colour choices. “Everything in the house was beige,” she says, laughing, “from the carpets to the walls and kitchen units.”

Nearly two years since they bought No 5, the property is up for sale again at a price that still falls under the €600,000 cut-off point for the newly announced Help to Buy scheme. But this time around No 5 is decked out in cool, contemporary shades of Farrow & Ball Dix Blue and Manor House Gray that give it a sense of spaciousness unusual for a 111sqm four-bed house. The couple certainly have the ability to re-imagine a space.

“We stripped everything back, put in wood floors and now it looks like a different home. We put a lot of work into it.” It is also full of contemporary pieces of furniture, such as a retro vintage leather chair from Sarah’s favourite website, made.com. “I bought so much from them that they rang to ask if they could come and do a photo shoot of the house.”

It serves to highlight the importance of staging a property for sale – and an ability on the part of a canny buyer to be able to visualise a prospective property with their own style of décor.

In their early thirties, the couple are now ready for their next move, with their sights set on a property in the city centre. They moved to Ballinteer from their Dartmouth Road two-bed apartment in December 2014. “I was eight-and-a-half months pregnant with my second then,” remembers Sarah, who works in marketing at Vodafone. “We moved house when I was pregnant with my first as well. In fact, I feel weird this time around because I’m not pregnant.”

The main living room has a bay window and a wood-burning stove. Double doors lead into a dining room that could also serve as a study. The kitchen has a breakfast table, Zanussi appliances and leads out to the back garden which, while north-facing, has a newly fitted deck that catches the evening sun and has already seen many a barbeque. A utility room with sink leads off the kitchen and there is a guest WC off the hall.

On the first floor, there are four bedrooms, two of them doubles. The master bedroom has an en suite with shower and a little window seat in the bay window where you can watch the comings and goings of the estate. There is also a family bathroom.

Climb the stairs to the attic conversion and there is a huge space, with extra storage under the eaves, which could be used as a spare bedroom or repurposed as a home office; Sarah uses it to practice yoga.

Grangefield is a small estate which, according to Sarah, has a strong sense of community. “The kids go in and out of each other’s houses. We have a street summer party, a clean-up weekend, Neighbourhood Watch and it’s different from living in town – you know your neighbours.” It’s something they will miss when they move back into town. 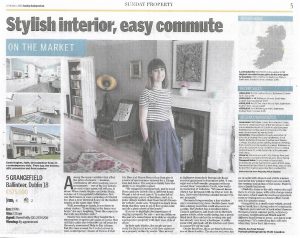