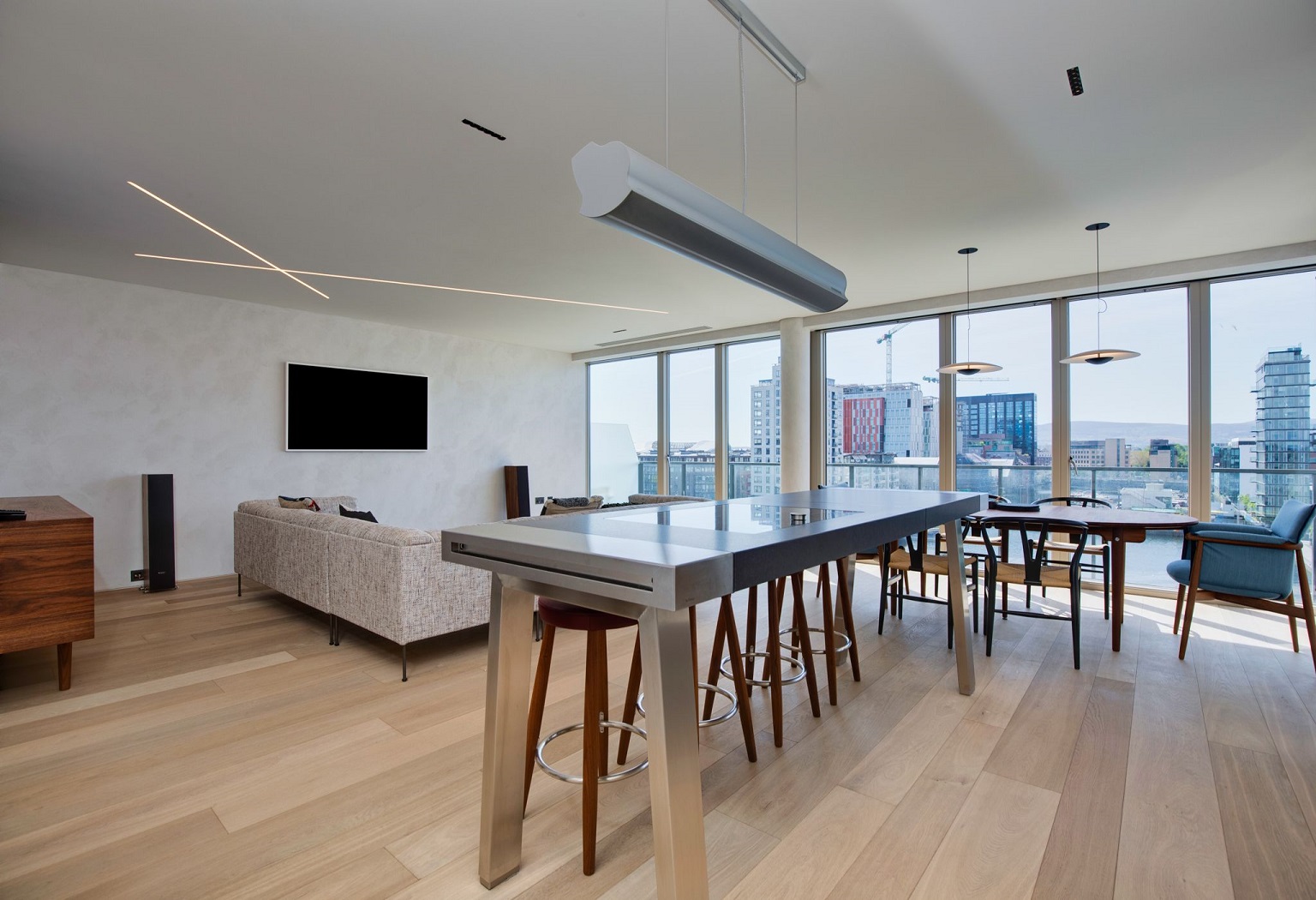 The €1m-plus apartment club: How the other half trade down

The view from the balcony of the penthouse at Coliemore Apartments in Dalkey, which is priced at €2.3m

The owners of those top-end houses worth €3m-plus in Ireland’s most expensive locations also have to downsize, for the exact same reasons that the rest of us do.

The kids have flown the nest and suddenly there’s space going to waste (albeit a lot more surplus room than the rest of us might encounter).

And the late-life problem of managing stairs and lawns is magnified if you’ve got three floors with an acre around it.

Generally, top-end house owners want to stay in the same upmarket locale, but are reluctant to move from a house in its own private grounds to a house on a more average street. They want the benefits of the big house: security, privacy and exclusivity and perhaps the same views. The only thing they want less of is the space.

Catherine O’Connor, a residential director of Colliers, has years of experience with high-end trade downs. She says that most top-end home vendors trading down will want to buy a luxury apartment in the same area.

“Having spent many years already in the locality, they will be most eager to stay put in familiar surrounds.”

O’Connor has just brought to market a two-bed apartment of 1,465 sq ft at 16 Raglan Hall off Clyde Road in Ballsbridge in Dublin 4. It comes with 15ft high ceilings, period chimney pieces and a luxurious master bedroom ensuite. Its rooms very much echo those of period homes in the locale.

With a price tag of €1.35m, the agent believes it will likely go to a downsizer already living in the Ballsbridge or D4 area or possibly someone coming in from a nearby neighbourhood like Clonskeagh. “I’d say it will likely be bought by someone selling a house worth €3m-plus. It has no grounds to manage and Herbert Park is right on the doorstep.”

The penthouse in Donnybrook Gardens

Today we look at how the other half downsizes with six examples of the sort of apartments they will choose to buy, all priced over the €1m mark.

According to Jenny Battersby at Hooke & MacDonald, apartment buyers at the very top end of the market are very often bi-locating. “They might want a holiday home abroad and spend half of the year away, so the security of an apartment would be a big plus,” she explains.

In Donnybrook Gardens, a development across the road from RTE’s newly downsized campus, three-bedroom 1,700 sq ft penthouses will set buyers back around €1.7m (other smaller two-beds come in at €855,000). Once again, the buyers in this brand new upmarket scheme have been mainly downsizers in the D4 area. Many are professionals eyeing a retirement in the future.

Much of the value here is, admittedly, written out for that Dublin 4 postcode and the benefit of being next to Greenfield Park. But if you’re selling a €3m home in the area, you’re also cashing in more than a million by downsizing.

There’s a concierge who will greet prospective guests and visitors into the building’s double-height hallway, which has become a growing trend in luxury new-built apartment schemes in recent years.

In addition, the Resident’s Club means guests don’t even have to be brought up to the apartment if you happen to want them there. Alas, the club is an alcohol-free zone, serving tea, coffee and still/sparkling waters instead. Golf clubs, Christmas decorations and the like, meanwhile, can be stored in a special facility downstairs (each apartment has a corresponding storage unit), meaning the actual apartments can remain blessedly uncluttered

Elsewhere in Dublin 4, albeit closer to town, Lansdowne Place sits on the former Berkeley Hotel site. In December 2017, it was reported that a penthouse here had been sold off the plans for €6.5m; one of the highest priced new-home sales of that year in Ireland.

This three-bed duplex at Hanover Dock is on the market for €1.7m and has been refurbished to the tune of €600,000

Bidding on other choice properties in the 250-unit scheme has reportedly exceeded €3.5m, with over 100 sold. But there are still around 150 units left to buy, with prices starting at €800,000. The average age of buyers is thought to be about 54 split between younger career professionals and moneyed downsizers. Among its new residents are those returning home after stints working abroad in New York or London. Others again are regional buyers in the market for a pied-á-terre in Dublin for the working week.

Avoca, Dylan McGrath’s Shelbourne Social and Eden One Spa are all next door to the building.

The concierge is also a perk of the Lansdowne Place development, on hand to arrange repairs, ordering dry cleaning, book last minute tickets, schedule a meeting room or even plan an event.

Die-hard Ballsbridge locals may be heartened to realise that the current in-situ concierge is Liam Guerin, formerly the restaurant manager of Roly’s Bistro.

Closer to the sea and next to the Fitzpatrick Castle Hotel, the penthouse at Killiney Hill Park, in Killiney, Co Dublin, has received plenty of enquiries since it was first listed last month. So far, a number of young (and evidently very successful) businesswomen, both from Ireland and the UK, have expressed an interest in buying. Enya is known to own a penthouse here and there are only two. Might this one be hers?

The living room of the penthouse in Killiney Hill Park.

The service charge isn’t exactly light on the pocket — around €10,000 a year — but does involve the ongoing maintenance of a very attractive communal garden.

If having Bono, The Edge and Eddie Irvine as a neighbour doesn’t seal the deal for you, the penthouse’s wraparound balcony could seduce its eventual buyer, offering an additional 1,500 sq ft of private outdoor space with killer views.

Décor-wise, there are marble pillars, hand-painted murals and roll-top baths. A buyer with an eye towards the uniformly modern might, however, decide on a refurbishment.

In nearby Dalkey, the split-level penthouse of the Coliemore Apartments has just been placed on the market for €2.3m.

It is thought Matt Damon may have rented the split-level penthouse at Coliemore Apartments.

Until recently, it rented at €7,500 a month. Word has it that ‘one of the movie people’ (very possibly Matt Damon, in his second stay in the area), moved out of the three-bed apartment just a couple of weeks ago.

There has been, according to a spokesperson, “serious interest” in the 2,211 sq ft penthouse, namely from entrepreneurs looking for a seaside bolthole. The orientation and 260-degree sea views are a big factor in the price tag, while the apartment’s copper bath, feature staircase and concierge also offer buck-bang for those keen for that all-important showstopper element.

The properties within Dublin’s Silicon Docks also command numbers every bit as lofty as SoCoDu’s priciest, and a three-bed duplex at Hanover Dock (€1.7m) has been on the market since the summer. The apartment, bought originally for €1.5m, has been refurbished to the tune of €600,000 by its current owners, a “high net-worth” family who were keen to retain the property as an Irish/European base, but thanks to the pandemic, no longer need one.

This three-bed duplex at Hanover Dock is on the market for €1.7m and has been refurbished to the tune of €600,000

Estate agent Owen Reilly says some “very well-known people” have already been through No28 for viewings, as well as some higher earners in the tech sector. A number of downsizers were also interested. As the penthouse was fitted out by owners with a view to living there themselves, the finish is a cut above your typical apartment dwelling. The Bulthaup kitchen is packed with spendy Gaggenau appliances and the engineered wood flooring comes courtesy of Ebony & Co.

Number 28 Hanover Dock’s Lurton smart-home system should also be a doddle for any techie types who do decide to sign on the dotted line.

Again, buyers can expect some pretty exalted neighbours for that price tag: a “former Irish president” lives in one of the complex’s other units. And if you need a cup of sugar, The Edge owns the property next door.