Would you like to wake up to an eagle’s nest view of the waterfront that includes a what’s what of landmark contemporary Dublin architecture?

Prospective purchasers seeking a city centre pad with a spectacular outlook and the feel of a luxury hotel suite should beat a path to Dublin’s Hanover Quay, where an unusual two storey duplex apartment has just gone on the market.

One of just four penthouses in the block, all the principal rooms of No 28 Hanover Dock are south-facing, and look out over Grand Canal Dock, Daniel Libeskind’s Bord Gais Theatre and Martha Schwartz’s Grand Canal Square with its distinctive and theatrical coloured lighting that comes into its own at dusk.

The panorama takes in a cityscape that includes Boland’s Mills and the Aviva Stadium, with a backdrop of the Dublin Mountains in the distance.

The area around Grand Canal Dock is being talked up as Dublin’s Water Quarter, and there are plans for a continuous Green Mile running and cycling track, lit by LED lights, around the dock, as well as for leisure pontoons.

Already the area sees plenty of kayaking and other water-sports, and Waterways Ireland has ambitions to make this the embarkation point for tourists setting sail on a journey along Ireland’s inland waterways.

Dublin’s Docklands is, of course, home to many of the biggest tech, legal and accountancy firms in the country, including Google, HSBC, Facebook and AirBnB, and Hanover Quay is a premium rental location. Many senior executives working long hours don’t all want to face a commute home to the suburbs at the end of the day.

An investor buying this property could expect rental income in the order of €7000 per month, a figure that’s only likely to rise as demand in the area is heightened by the imminent post-Brexit arrival of financial services giant JP Morgan.

Designed by architects O’Mahony Pike, and constructed by Sisk in 2006, the Hanover Quay development is aging well. The mixed-use scheme includes nearly 300 apartments, and the design carefully handles the change of scale from the nearby Georgian grain warehouses to the industrial heritage of the Dublin South Docks.

The high-end development was recognised in the annual Irish Architectural Awards, and voted Residential Development of the Year in the Irish Property Awards.

The entrance is right beside the outdoor terrace of HQ restaurant, which used to be Ely. The internal courtyard garden designed by Diarmuid Gavin has matured nicely, the lifts and internal areas are well maintained, and the buildings feel solid.

Internally, The Penthouse still looks fresh and modern, with high quality finishes and fittings. It has been staged for sale by House & Garden, and is decorated in tasteful shades of grey and white.

It offers 1400 sq ft of living space and a further 900 sq ft of outdoor space, split over two levels. Once inside, the living/dining room is to the front on the lower level, with a compact but efficient SieMatic kitchen fitted with integrated appliances including a Gaggenau oven and microwave.

The master bedroom is also to the front, giving new owners the prospect of starting each day with a view that is guaranteed to be interesting, whatever the weather. The master bedroom is en suite, while the second and third bedrooms, both doubles, share a bathroom. There’s a small utility room on this level, and a slim terrace wraps around the apartment.

Upstairs, the living room is a show-stopper space that opens out onto a large terrace, ideal for dining outdoors or simply sitting and taking in the views. There’s a study area too.

In keeping with the modern design, the Penthouse comes with under-floor gas-fired central heating, air conditioning, video intercom and two designated underground car parking spaces. It has a BER of B3.

The amenities of Grand Canal Dock are legion. The Marker hotel has come into its own in recent times; Gareth Mullins’ food draws in lunchtime business and pre-theatre crowds, both captive audiences, but his themed seasonal menus make the restaurant a destination in its own right. Over the winter months, his Beef and Bordeaux menu will be an attractive proposition.

Other places to eat include the ever-reliable Herbstreet, the aforementioned HQ, Rita Crosbie’s Café Bar H and, across the dock, Charlotte Quay, with Lottie’s Bar, is a favourite with office workers in the area, next door. A branch of Sprout on Sir John Rogerson’s Quay hits the spot for a healthy take-out salad.

In terms of location, Grand Canal Dock has its own DART station, just a few minutes’ walk away on Barrow Street, and the city centre is a 15-minute walk away, while the IFSC is even closer via the Samuel Beckett Bridge.

To read the article on Independent.ie, please click here. 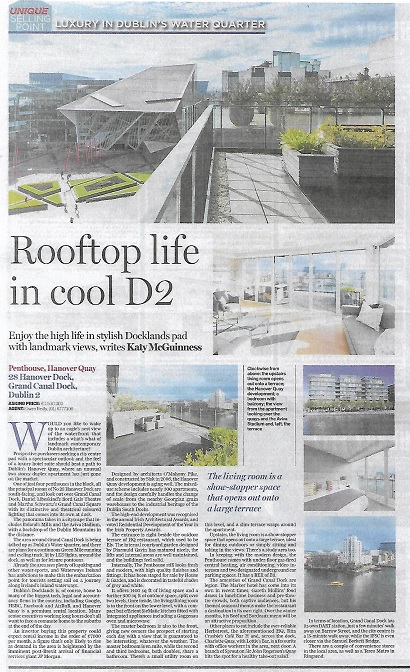