The Sunday Times | A penthouse in high-rent heaven

This three-bedroom apartment is on Grand Canal Wharf – home to Google, Facebook and their wealthy tech hipsters, says Dara Flynn

No 69 Grand Canal Wharf, on South Dock Road, is a waterfront penthouse and former show apartment near Grand Canal Dock.

It has the classic Irish apartment layout with a living/kitchen/dining area that opens onto a terrace with views over Grand Canal Basin and towards the north quay of the River Liffey.

The apartment, which is up on the fifth floor, offers more than 90 sq m of living space. There’s a big master bedroom with its own bathroom and dressing area, and two other double bedrooms, plus a main bathroom. There are built-in wardrobes, walnut floors, and plenty of light.

Those are the facts, but we have to go beyond issues such as interior design and floor space to assess the real value, by looking at in in the context of the current rental market, and its location.

Last month, images of large queues for an apartment to let, which was about 400m from this spot, were shared on social media – all that interest was for a fairly average €2,050 per-month two-bedroom pad. One-room bedsits are letting for €800 per month.

The location by Grand Canal Dock is right in the heart of high-tech heaven; Google HQ, Facebook, Airbnb-HQ, and it’s home to high-rise apartment buildings populated by high-earning individuals. Although €650,000 is a lot of dough, you’ll have no trouble covering the mortgage.

Agent: owenreilly.ie (which is hosting a Docklanda open house day next Saturday, with homes on view from 11am to 1pm).

They say: An apartment to fall in love with and move into immediately

We say: Not the area’s prettiest building, but this is a top-notch location. 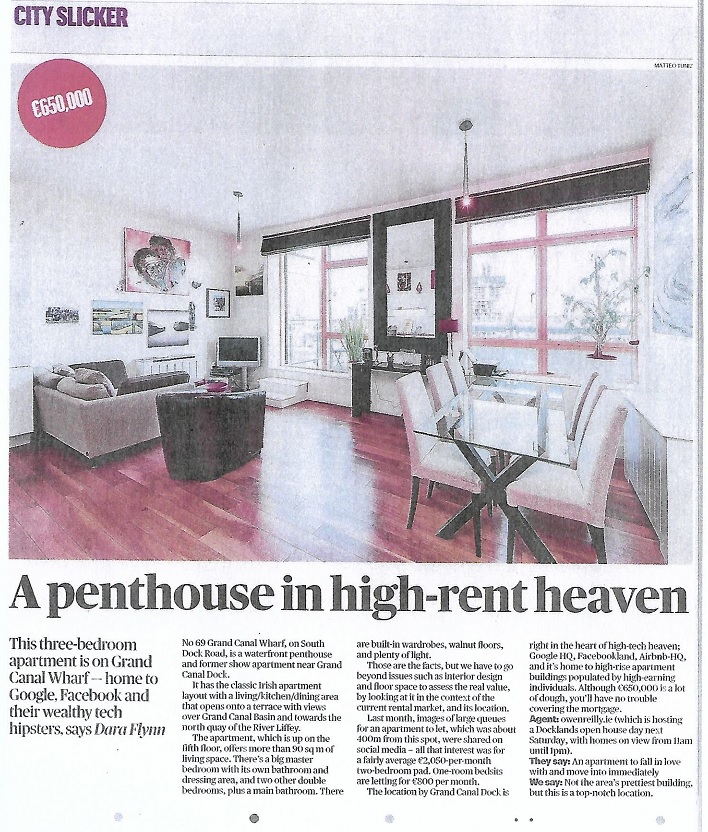