The Sunday Times | City Slicker – Showtime in your own backyard

It backs on to Croke Park, so buyers of this three-bedroom home will know what awaits them – for some it will be a plus, writes Dara Flynn

How much would you pay for guaranteed free tickets to every gig that ever takes place at Croke Park and many of the sporting fixtures, as well? Take that sum, then subtract how much you would pay the hordes in GAA season, and rock and pop fans on gig nights, to get the hell off of your front doorstep.

That’s the equation facing the buyer of No 28 St James’s Avenue, a redbrick cottage right near the entrance to Croke Park Stadium, at the Clonliffe Road side.

It’s not tiny, at a respectable 80 sq m, and it has two bathrooms and three bedrooms, which is at least two bedrooms and one bathroom more than you might guess it contained, judging from its compact exterior.

Inside, the ceilings are high, giving an even greater impression of space. Outside, the rear yard is 12 metres long and has been unattractively paved in concrete, but there’s access at the rear and room for a car. The rear view, meanwhile, is a close-up of the stands.

Although not expensively finished, No 28 is in good nick, with a relatively modern kitchen, pale wood floors and all of its pieces in the right places, so you could move straight in and sit with your bag of cans in the garden enjoying the live show – ticket or no ticket. Failing that, you’ll have no trouble letting it. There’s a dearth of rental properties in Drumcondra, where three-beds can fetch at least €2,000 a month.

They say: No need for a car, as the employment hotspots are all within walking distance and there are excellent transport links from Drumcondra

We say: This offers the best seats in the house or its too close for comfort, depending on your musical tastes 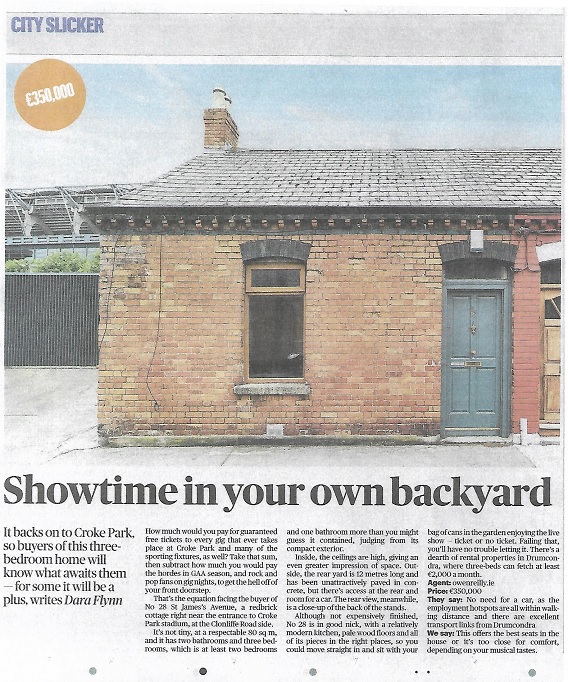