Towering over modern Dublin, by Eithne Tynan and Mark Keenan

More than once, the occupants of the Millennium Tower in Dublin’s Grand Canal Dock have been left in the miserable position of having to leave the building when they want something to eat.

The bar and restaurant on the tower’s bottom floor was run first by Conrad Gallagher in the boom days when Millennium Tower was first built. Gallagher’s Ocean restaurant closed down, as did the Mourne Seafood Bar which succeeded it.

Some weeks ago, though, the premises was taken over again, this time by the Bereen brothers of Coppinger Row fame, who opened the Charlotte Quay restaurant there. So now, once again, the Millennium Tower residents need never be too far from a fig and Gorgonzola tart.

Conor and Marc Bereen have called in Killian Durkin as head chef, a veteran of La Mere Zou, Thornton’s and the Mermaid Cafe.

Like Coppinger Row, the food is Mediterranean but with strong Arabic and African influences.

You won’t have far to go if you live just upstairs at No35 Millennium Tower – located on the second floor of the 17 storey building. At 1,216 sq ft, this apartment is bigger than some family homes.

The accommodation here includes three bedrooms, two of them ensuite. The third bedroom is used as a study at present and is stylishly decorated with dark walls and a fitted bookcase, giving it a matured look not generally found in modern apartment blocks.

The main living area is an open-plan kitchen, dining room and sitting room. The kitchen has white cabinets and a curved breakfast bar, while the living and dining area has a curved wall with a corner full of windows – it faces south, so it gets plenty of light The main bathroom has a corner shower cubicle and a glass sink, and there’s also a utility room off the study or third bedroom.

The apartment comes with a designated parking space and there are management fees of €2,280 a year. Should you want to rent the place out, the selling agents suggest it could bring in €2,750 a month. This is a popular area to rent for high ranking foreign executives brought in to Ireland to drive some of the area’s well known international techie companies.

The Tower – which has retained the title of Dublin’s tallest residential building since opening in 2000 and is Leinster’s second highest building overall after Google HQ, which is located nearby at Barrow Street – turns 16 this year. The building was designed by O’Mahony Pike and still looks svelte and neat almost one generation and a property crash later.

Zoe Developments boss Liam Carroll, responsible for many blocks of small sized homes in Dublin and one of the most prolific developers of the boom years, took a change in direction when he constructed the Tower – in this case, the apartment spaces were far more generous and the finish well above usual standards. This district has become the postcard pic for modern Dublin and is particularly spectacular at night with neon lighting and the assortment of cutting edge modern buildings reflected in the water.

Nearby is the deftly drawered and super skinny Alto Vetro building by Shay Cleary, one floor short of the block you are looking from.

The immediate vicinity of Grand Canal Square is also a gallery of well known Irish and international architectural and design talent.

There’s the tower itself by O’Mahony Pike, with its pivotal corner position overlooking the basin. This is located near the distinctive cubist chequerboard face of the Marker Hotel by Manuel Aires Mateus.

You’ve got the sloped glazed projector of Daniel Libeskind’s landmark Bord Gais Energy Theatre and to set it all off is Martha Schwartz’s street art installation in a display of red-angled light sticks which give the place a distinctive glowing character at night, all reflected, along with the tower itself, in the water. Her Grand Canal Square installation starts with a ‘red carpet’ path of red-resin glass rolling from the steps of the theatre to the square and to the water’s edge. These are spiked with light sticks in matching red.

There’s a green ‘carpet’ and planters of various types which Schwartz stocked with marshland plants as a nod to the area’s origins. There’s also a water feature of stacked green marble which flows with bubbling water. In daytime, the views are no less colourful – you’ll be treated to the comings and goings of bright canary yellow DUKWs of D Day landing vintage. This is where the famous Viking Splash tour dunks in, taking its horn-helmeted passengers on the water-bound section of their noisy amphibious tour of Dublin.

But if you want to duck the chaotic noise of the city’s new Vikings, you can always adapt the response of the Irish monks of old – retire to your Tower and pull the ladder up after you. The quality glaze keeps the sound out. 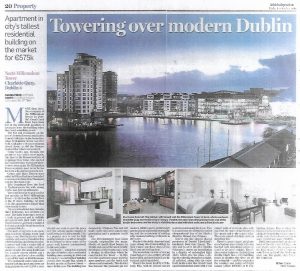