Waking in a Winter wonderland, by Katy McGuinness

Penthouse offers an oasis of calm in the city

The shortage of family-friendly homes in the city centre is one that’s unlikely to be resolved in the near future, so for those in the market for a decent-sized apartment with some outside space, this penthouse on Pearse Street is worth looking at. We Irish have been slow in coming around to the idea of bringing up our families in apartments, but it’s the norm in other European cities and an attractive proposition for those who don’t want to spend years of their lives commuting at the beginning and end of each day.

Of course, there is a trade-off involved because there aren’t a whole lot of three-bed semis with south-facing back gardens within walking distance of Grand Canal Dock. But the detrimental impact on family life of children dropped to the crèche in their pyjamas in the dark before breakfast, only to be collected again having had their dinner and ready for bed, has been well documented.

The alternative is to make like the Europeans and accept that a good quality of family life doesn’t only exist in the ‘burbs and embrace the positives of city living, foremost amongst which is the fact that the office is a 10 minute walk rather than a two-hour commute away. That means time for breakfast with the family and bedtime stories, as well as shaking off all the stress that goes with engaging with public transport on a daily basis.

Young professionals also want to live in the city centre and the convenience to the multi-nationals and tech start-ups, as well as law and accountancy firms based in the docklands, makes The Wintergarden an attractive proposition for that cohort too. Selling agent Owen Reilly estimates the monthly rent for No147 at €2,500, offering a yield of 5.7pc to an investor.

The Wintergarden lies behind the Maldron Hotel on Pearse Street, adjacent to Grand Canal Dock, College Green and Trinity College, with the pedestrian bridge to the International Financial Services Centre a five minute walk in one direction and Merrion Square a five minute walk in the other. The apartments are built on the site of and incorporating a former industrial works. Pearse Dart station is a short walk away.

Pearse Street is a neighbourhood that’s on the rise, with plenty to commend it in addition to its convenient, central location. The pretty Georgian homes on Pearse Square are always in demand and the Gilbert Library building is beautiful.

There’s an eclectic mix of useful neighbourhood shops, some of which are still housed in traditional Victorian buildings (including the one owned by the family of the eponymous Patrick Pearse), and the spanking new Bio-Sciences Building of Trinity College Dublin. Ringsend, just over the bridge, has a GAA club, Clann na Gael, with active junior programmes.

It’s almost 20 years since the Wintergarden was launched in 1998, and the development appears to have withstood the intervening years well, with the apartments built around a distinctive central, glass-roofed courtyard that is planted with mature trees and shrubs. Once inside, it’s a calm refuge away from busy Pearse Street outside.

With 1162 sq ft of living space, and three bedrooms, this split-level apartment is comparable in size to the average suburban semi and the roof garden is even big enough to think about growing your own on a modest scale in large planters.

Certainly there’s room for one of those fashionable vertical walls of salads and herbs, and for a few courgettes and strawberries. The current owners use the sunny, south-facing deck for barbecues and eating outside, and have made it a cheerful space, crammed with pots filled with colourful plants. They have even installed a bird table.

The apartment is in good decorative order. The split-level entrance hall has a study area and storage space and leads into the main loft-style apartment, which features a dual aspect open-plan living/dining room opening out via French doors on to the terrace. It’s a bright, height-ceilinged space with plenty of natural light and wooden floors.

The separate kitchen is fully fitted and the apartment is being sold with the appliances included, so that new owners will not have to stump up for fridge, freezer, oven, hob, extractor fan, dishwasher or washer-dryer.

The three bedrooms are all doubles. The master bedroom is spacious and high ceilinged, with a walk-in wardrobe and ensuite shower room.

The two remaining bedrooms share a bathroom with a Jacuzzi bath and shower over. A secure underground parking place is included in the sale. 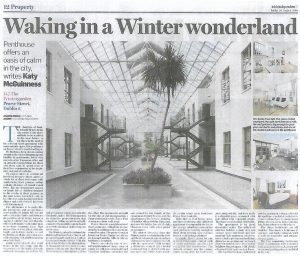